Only a few days to The Force Awakens… I think it is time to look back to a Star Wars poster series I presented in the past months: the “Light of the Force” triptych. Here are the three posters as one piece, as I originally planned them:

The triptych formed by the three pieces depict three classic spiritual or biological fathers and sons, three armed heroes: Obi-Wan, Vader and Luke. The three parts show consecutive stages of the day: sunset, night and dawn. The galaxy binds the pieces together. 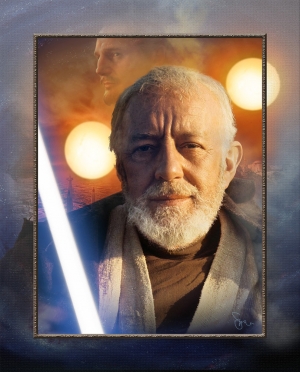 Vader’s Night shows the tormented Vader, haunted by his burning memories and the true nature of the dark side. He raises his aggressively glowing red lightsaber but he cannot fight the ghosts and failures of his past (from bottom left to middle left): his dying mother, the massacre of the tusken camp, the beheading of Count Dooku, the murder of the younglings in the Temple, the slaughtering of the Separatists and, most prominently, the consequent death of his beloved Padme. Vader is the archetype of the fallen, angry, helplessly suffering hero. END_OF_DOCUMENT_TOKEN_TO_BE_REPLACED

I started a poster series about the locations of the Star Wars movies a few years ago. Many of them are already finished; some are still missing. This is a series where the main characters of the posters are often supporting characters in the movie – however, they are important for the subject of the picture. (Click on the images to see them in larger size.)

In this post, I look back to the five posters about Star Wars Episode II Attack of the Clones. I present them in the order they appear in the story. 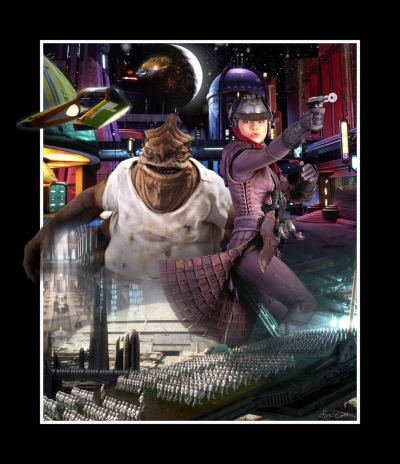 Our first (and also last) location is Coruscant. The planet has a great contrast compared to its appearance in The Phantom Menace. The location is visually dense: we see everything from landing platforms to clubs and military assembly sites. This diversity appears on the picture: marching clones, the Senate, the Jedi Archives and Coruscant nightlife are represented. I colored the marching to white because I wanted it to fit the Senate building, to create contrast with the upper dark and wildly colored areas (and the dark planet itself), and to keep orange and red colors for later. END_OF_DOCUMENT_TOKEN_TO_BE_REPLACED

The Nature of the Dark Side originates from the novelization of Return of the Jedi by James Kahn:

He contemplated the dense impenetrability of the deep space beyond the window. Densely black as his soul – as if he were, in some real way, this blackness; as if his inner spirit was itself this void over which he reigned. He smiled at the thought; he was the Empire, he was the Universe.

This paragraph was the core of the poster, combined with one of the few feelings Palpatine can feel: the lust for power over all things (the other one would be rage). Therefore, the key messages were: total power and hopelessness.

Instead of pure blackness, I decided to use the galaxy on a black background and merged it with Palpatine to illustrate the sentence “he was the Universe”. Darth Sidious looks like a tumor; his presence distorts the spiral arms of the galaxy and replaces the brightest center of the galaxy with blackness and the Death Star. This is his true aim, the aim of the dark side: replace life with death.

END_OF_DOCUMENT_TOKEN_TO_BE_REPLACED

Five years ago today, the Eleventh Doctor debuted in the Series 5 opener The Eleventh Hour. This episode was my first encounter with the Doctor (although I watched it in November 2011).

To celebrate the anniversary, I give you a deep analysis of one of my favorites, the Doctor Who Series 5 poster. Click on the picture to see it in full size and continue reading!

First, study the picture from the viewpoints of people with different knowledge about the topic. END_OF_DOCUMENT_TOKEN_TO_BE_REPLACED

If you are really brave or you desperately want to know a lot of stuff about the creation of the Saga Poster, click here. You will find there a detailed picture analysis and a change log of the different versions. 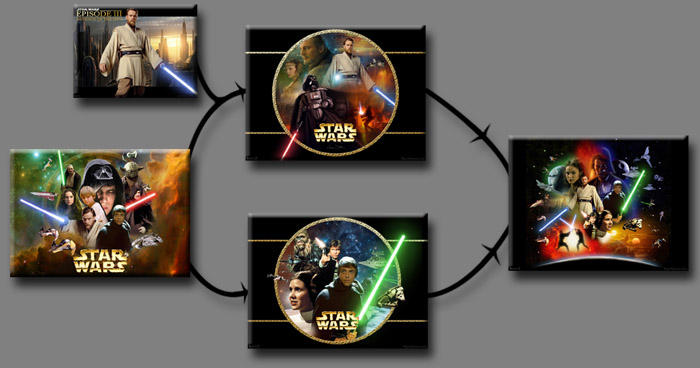